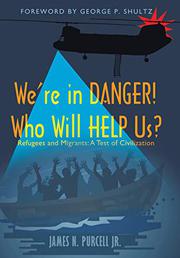 WE'RE IN DANGER! WHO WILL HELP US?

A remarkably comprehensive history of American refugee policy since the Vietnam War written by one of its chief architects.

Following the Fall of Saigon in 1975 and the withdrawal of American military forces, a catastrophic humanitarian disaster loomed: the “systematic persecution and inevitable flight of multitudes of Indochinese,” a terrifying “refugee storm.” The predicament proved too dire for the existing agencies in the United States to manage, and, in 1979, Chas Freeman, a Foreign Service officer, issued a momentous report calling for the establishment of a Bureau of Refugee Programs, the “first standalone organization with refugees as its exclusive raison d’être.” Debut author Purcell was instrumental in the establishment of the agency and served as its director for several of its embryonic years. The author, with an extraordinary eye for painstaking detail that is by turns impressive and exhausting, tells the story of the agency’s founding, including the governmental barriers, its intramural “existential threats” and congressional antagonisms,” as well as the problems posed by a “lumbering” U.S. State Department. The Refugee Programs bureau expanded to manage refugee crises all over the globe—the Middle East, the Soviet Union, Latin America, and beyond—always in search of “durable solutions,” which included “voluntary repatriation, regional settlement, and third country resettlement.” With great analytical rigor and candor, Purcell depicts the RP’s missteps as well as its ultimate emergence as a rare bureaucratic organization, both nimble and motivated by a profound sense of moral purpose. “As I have tried to demonstrate, the United States succeeded in this mission by melding humane foreign policy with a can-do, coherent entity that quickly became one of the State Department’s most dynamic organizations,” he writes. The history the author furnishes is a sprawling one and includes an account of the nation’s shifting attitudes toward outsiders, from one of “guarded openness” through “isolation and self-sufficiency” to “global engagement in humanitarian solutions.” Further, he provides a searching discussion of the special challenges posed by the recent Syrian refugee crisis. This is an authoritative guide to the subject, consistently perspicacious and lucid, and includes a foreword by former Secretary of State George P. Shultz.

A vital guide to American refugee policy, both historically exacting and thoughtful.