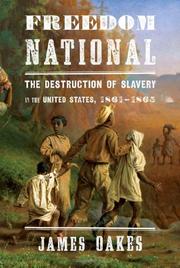 A finely argued book about how the destruction of slavery involved much more than Lincoln’s Emancipation Proclamation.

Oakes (History/CUNY Graduate Center; The Radical and the Republican: Frederick Douglass, Abraham Lincoln, and the Triumph of Antislavery Politics, 2007, etc.) returns to the notion that slavery, rather than states’ rights or “an outbreak of hysteria, irrationality and paranoia,” was truly the origin of the Civil War. In order to challenge the Constitutional consensus on slavery, the anti-slavery activists had to appeal to the broad principles of “natural law,” to which the Framers had implicitly referred. Also, opponents of slavery had to make the convincing argument that slaves were in fact not property, using the Somersett case in England as a legal benchmark. In addition to the Emancipation Proclamation, Oakes reveals the many smaller but significant victories for the opponents of slavery—e.g., New York’s 1799 emancipation law and John Quincy Adams’ eloquent defense of the slave ship Amistad’s rebels before the Supreme Court. Proponents of the Liberty Party asserted that slavery was not a national institution, but peculiar to certain states and suitable to be “cordoned off,” thus underscoring the importance of the border states during the Civil War as “containment” of the slave contagion; on the other hand, freedom, they believed, was national and not able to be restricted locally. Oakes wades through extremely nuanced arguments that evolved over time in the North and South, in Congress, in the military and in the mind of Lincoln. However, only 13 percent of the 4 million slaves living in the South were freed by the end of the war, prompting the necessity for a 13th Amendment to ensure Southern tractability.

A useful contribution to the literature about slavery and the Civil War.