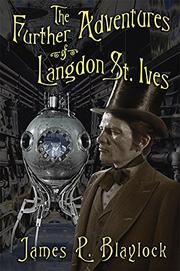 In this illustrated collection, Blaylock (Beneath London, 2015, etc.) offers readers five stories featuring scientist and adventurer Langdon St. Ives, a character first introduced in 1978 when Blaylock was one of the pioneers of the steampunk genre.

Langdon St. Ives is a scientist, explorer, and cheerfully married family man who continually finds himself embroiled in strange adventures and investigations that transform both Victorian England and more exotic locales into places lavishly beset by all the familiar and beloved trappings of fantastical steampunk. Accompanied by a cast of charming friends and allies, St. Ives faces a series of absurd dangers, often the machinations of a cartoonish nemesis in the mad scientist mold, Ignacio Narbondo. In the first story of the collection, “The Ebb Tide,” Blaylock shows off a flair for spectacular images. A search for a mysterious and powerful device leads St. Ives to Morecambe Bay, where he rides a submersible down through strata of quicksand to a hidden ocean graveyard full of objects and creatures that have sunk through the sands and into the waters below. The five stories in this collection (two new and three already published) treat readers to an amusing excess of genre-pleasing details—the plucky orphan assistant, gemstone-powered madness rays, a hot air balloon, the subterranean lair of an evil genius—and while the descriptions of these details sometimes expand to the point where they hobble the story, they remain a pleasurable entertainment. St. Ives is a very Holmes-ian hero and an enjoyable one, but his supporting cast, including Jack Owlesby, the Watson-like faithful chronicler, often provides the emotional anchor. Unfortunately, the illustrations by Potter are graceless and clunky distractions that look like digital collages of sideshow horrors and costume shop Victoriana.

A collection of enjoyable and cheerfully unsubtle adventures in the company of an endearing cast of characters.