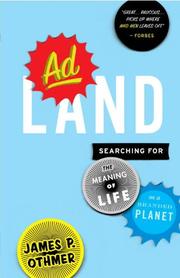 Searching for the Meaning of Life on a Branded Planet

A former ad man delves into his 20 years in the slogan trenches, musing on how advertising influences us and how the Internet is revamping it.

At some point, Othmer (The Futurist, 2006) probably made you buy something: a phone service, some cat litter, possibly fried chicken. To prompt that purchase, he might have spent weeks staging a pitch disguised as an Off-Broadway show, or days contemplating the difference between crispy and crunchy, or hours on a conference call discussing how kitty litter can make your cat’s poop shrink. In those moments, Othmer felt his soul was being corrupted. At other times he caught creative highs from being huddled in a meeting room thinking up ideas. Both experiences gave Othmer an understanding of advertising—the process, the positioning, the ultimate point of it all—that we consumers could never acquire on our own. His goal is to explain the business, from its conception in the focus-group meetings of a Chicago research institution to its dumbing-down at the hands of franchisees desiring a KFC commercial that borders on food porn. Othmer uses his often hilarious experiences to discuss the stress-fueled environment advertising springs from, how its message is targeted to consumers and how branding can actually be a good thing—even now, as traditional branding is collapsing. That last fact leads the author on a quest to understand advertising’s future, particularly online, and he interviews the heads of some of the biggest online marketing shops. To be a successful ad exec, he concludes, you have to understand new media and realize it is a galaxy of endless possibility that allows brands to interact and have a conversation with consumers—something a 30-second Super Bowl ad could never do.

Othmer’s engaging dissection of advertising gives consumers valuable insight into how companies manipulate messages to convince us to give them our money.