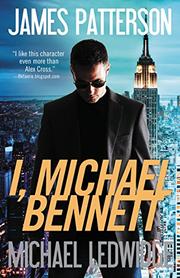 Patterson’s partnership with Ledwidge is already up to the fifth installment in the perilous adventures of NYPD Detective Michael Bennett (Tick Tock, 2011, etc.).

After long hours planning and praying and waiting for the perfect chance, the NYPD–DEA task force charged with arresting Manuel “the Sun King” Perrine, head of Mexico’s Tepito drug cartel, is ready to pounce. Despite some last-minute glitches that lead to the first of many casualties, they grab Perrine and lock him up. But Bennett, who’s played a leading role in the task force, soon realizes that his troubles have only begun, because Perrine’s many loyal, well-paid followers, lots of them only a phone call away from his Manhattan cell, really, really don’t want to see him go down. Once Bennett turns down a $250 million bribe to turn Perrine loose, the gauntlet has been thrown, and he spends the rest of this shoot-’em-up dodging bullets, many of which find their way to less lucky targets. Perrine’s eye-candy bodyguard, Marietta, is especially insinuating and emphatic in her threats, but whenever Bennett picks up the phone, it’s the same deal: We’re going to kill you, we’re going to kill your family, we’re going to kill two police officers a day until you release the Sun King. Nor are these idle threats. Perrine arranges for two of Bennett’s 10 adopted children to get shot; his minions disrupt the legal proceedings with a bang; and those first two cops, at least, are toast.

Will Bennett’s loyal nanny-and-more, Mary Catherine, abandon her charges in their darkest hour? Will Perrine escape from custody in a made-for-the-movies sequence? Will Bennett finally close his case for good? Or will Patterson and Ledwidge ring down the curtain leaving the conflict unresolved and paving the way for a sequel? Stay tuned.