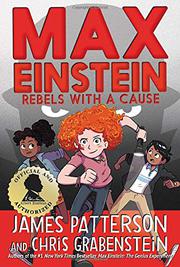 REBELS WITH A CAUSE

From the Max Einstein series

Max Einstein is “the smartest girl in the world.” But is she smart enough to solve the globe’s most pressing problems?

The child genius is in hiding in New York City, and she’s bored out of her mind. The leader of a group of child geniuses that formed the Change Makers Institute, Max normally spends her time traveling around the world trying to solve the Earth’s most devastating problems. But after evil Dr. Zimm, founder and leader of the nefarious organization called the Corp, tried to kidnap her in series opener The Genius Experiment (2018), she was forced to go into hiding. When her friend and fellow genius Siobhan asks Max to join her on a mission to Siobhan’s home country of Ireland, where water contamination is making Siobhan’s family and friends sick, Max finally gets a chance to get back in the game. But as she travels from Ireland to India with her group of friends, trying to solve water-contamination and -shortage issues, she’s also running away from the Corp, a reality that makes Max wonder if her presence on the team—and the solutions she devises—are doing more harm than good. This fast-paced story features a diverse team of protagonists that realistically tackles some of the world’s most pressing social-justice issues. While it is mostly entertaining, the insertion of scientific principles and ethical considerations often feels out of place and heavy handed, and some of the details included about India are incorrect.

Overall, a fun read that could have benefited from less preaching and more background research.