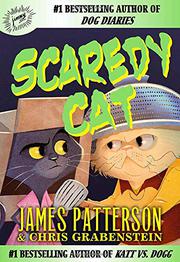 Two shelter cats take on a mysterious puss with weird powers who is terrorizing the feline community.

Hardly have timorous (and aptly named) Poop and her sophisticated buddy, Pasha, been brought home by their new “human beans” for a two-week trial than they are accosted by fiery-eyed Scaredy Cat, utterly trashing the kitchen with a click of his claws and, hissing that he’s in charge of the neighborhood, threatening that if they don’t act like proper cats—disdaining ordinary cat food and any summons (they are not dogs, after all), clawing the furniture instead of the scratching post, and showing like “cattitude”—it’ll be back to the shelter for them. Will Poop and Pasha prove to be fraidycats or flee to the cowed clowder of homeless cats hiding from the bully in the nearby woods? Nope, they are made of sterner stuff and resolutely set out to enlist feline allies in a “quest for life, liberty, and the pursuit of purrs!” Cast into a gazillion very short chapters related by furry narrators Poop and Pasha, who are helpfully depicted in portrait vignettes by Herzog at each chapter’s head, the ensuing adventures test the defiant kitties’ courage (and, in some cases, attention spans) on the way to a spooky but poignant climax set, appropriately enough as it happens, in a pet graveyard.

A-mew-sing fare for readers who sometimes feel like fraidycats themselves.