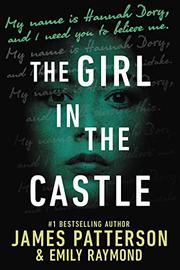 THE GIRL IN THE CASTLE

Eighteen-year-old Hannah Dory is an English peasant living a harsh existence in 1347. Hannah Doe is a resident of Belman Psychiatric Hospital in 2023 New York City, brought in after being found on the street experiencing hallucinations and screaming something about a castle. Modern-day Hannah periodically enters a catatonic state, something the staff refer to as her “going to the castle.” Columbia psychology student Jordan Hassan is a new intern at Belman, and his interest is piqued by this girl no one knows much about. He decides to play detective and try to discover her history himself. Meanwhile, in the medieval England storyline, Hannah Dory tries to save her village from starvation by sneaking into the baron’s castle but finds herself swept up in a fight between the new baron and his rival. The book sustains a breakneck pace with short chapters and many cliffhangers that will keep readers’ interest. Patterson’s author’s note includes a list of mental health resources and describes his experience of working as an aide in a psychiatric hospital when he was a teenager. The narrative thoughtfully centers mental illness and touches on complex topics like suicide. Whiteness is the default; Jordan is cued as Muslim.

Thrill-seekers will be absorbed by this exciting story.