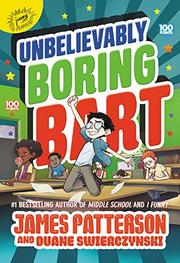 Bart hides behind a boring facade while secretly working on a video game.

Though Bart claims to be boring, frequent illustrations of the inventive ways Bart sees the world mark him as entertaining from the start. Then Bart discloses that he’s been tasked with defending the Earth against an invasion of the tech-eating Lerkians—only to reveal the phone app he uses to do so is really a game he’s invented that takes inspiration from his difficulties with bullies. When the game goes viral, Bart finds himself spending all of his time debugging it, which comes between him and his only friend—a cyberschooled girl who lives in his apartment building but whom he talks to only via a Snapchat-esque app. With the announcement that a popular YouTube channel will be coming to town to cover Bart’s game, Bart decides to use the show and his proceeds to get revenge on his three bullies—but the turnabout doesn’t work out as he hopes. The bullying storylines play out with nuance—though neither the bullies nor Bart face official consequences for their actions, the interactions lead to introspection and growth. Introverted, white Bart is happy that people like his game, but he prefers a smaller friendship circle—especially his neighbor friend, who is eventually revealed to be a girl of color with disabilities.