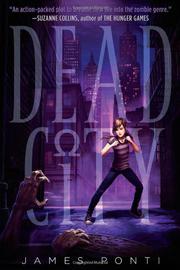 From the Dead City series, volume 1

The summer before starting at a science magnet school on Roosevelt Island in the East River, Molly spends Friday afternoons at the coroner’s office on the east side of Manhattan. Her mother worked there before her death, and Molly feels comfortable with the dead bodies. Once in school, she joins a group of friends and is initiated into Omega, an organization that both protects and fights the zombies of New York. Her group consists of four classmates: one other girl and two boys. All follow the rules of CLAP: keep Calm, Listen, Avoid physical confrontation and Punish. The zombies arose from an 1896 subway explosion that killed 13 worker; they prefer to be called undead and derive their strength from schist—Manhattan bedrock. In Ponti’s breezy and adventure-driven story, readers follow Molly and the Omegas as they connect the dots between the explosion, Little Women, the Dewey Decimal System and the Periodic Table of Elements. It works. Ponti incorporates New York City sights and gory zombie descriptions in a quick transit to an exciting finale with high-blown dramatics and a surprisingly tender moment.

A fast-paced read for those who like their zombies with just a little fright.