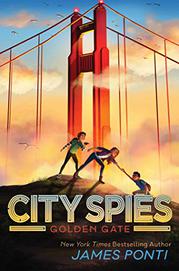 From the City Spies series, volume 2

Like any good spy thriller, this second adventure with MI6’s young secret agents begins in the middle of a perilous mission: Agents Brooklyn, 12, and Sydney, 14, are stealthily escorting two daughters of high-ranking Brits on an shipboard marine biology program for girls, which turns out to be good luck because the ship has just been boarded by Norwegian pirates who plan to kidnap them for ransom. Brooklyn and Sydney thwart them handily and return to Scotland, where they attend school under assumed names while continuing their spy training at a facility hidden inside a climate research station. Before MI6 can give them a new mission, the whole group—Puerto Rican Brooklyn (nee Sara Maria Martinez), Rwandan French Paris (ne Salomon Omborenga), White Australian Sydney (nee Olivia Rose), Nepali Kat (nee Amita Bishwakarma), and Brazilian Rio (ne João Cardozo)—accidentally stumble upon two new missions on their own. First, they help track down the long-lost children of their leader, fondly called Mother even though he’s a man, and then they figure out the true story behind the suspicious California death of a retired MI6 agent and ornithologist. Combining their skills in areas like math, hacking, and sneaking around, the prodigies traverse the Western hemisphere looking for clues. The thriller is well paced, the characters animated, and the adventure engaging.