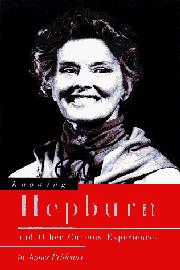 And Other Curious Experiences

Mixing as it does the celebrated with the rank ordinary, this memoir is of the ``My meetings with famous people'' variety, a subset of biography rich with tiresome possibilities. And playwright and screenwriter Prideaux explores almost all of them in this year-by-year account of his friendship with Hepburn (and any other celebrities that cross his path, including Elizabeth Taylor, Ryan O'Neal, and Burt Reynolds). This odd couple was originally brought together for a project that, as so often happens in Hollywood, was never produced. But friendship of a kind grew, and over the next 24 years, Prideaux would author and produce several made-for-TV movies for Hepburn. Though he is a writer of some talent, Prideaux is a particularly irksome narrator, conventionally opinionated, campily theatrical, pinprick sensitive. All too often we find him sulking over some meager slight, exalting at the celebrity's passing pat-the-dog kindness, or moved to tears by his own scripts. But whenever Prideaux can forget about himself for a moment, an almost compelling portrait emerges—that of the artist as a monstre sacrÇ. Despite his worshipful attitude, Prideaux does little to glamorize his star buddies who, gilded by fame, massively indulged and cosseted, feel quite free to slip the bonds of human decency whenever it suits them. Hepburn is hardly the worst offender, but she is a far, far cry from her well-mannered, patrician screen image. Yet even at her most unpleasant and unkind (such as when she publicly humiliates Prideaux), those around her still crowd close, desperate for the scrofula-curing touch that we believe celebrity status bestows. Despite Prideaux's excesses and the suffocating celebrity banalities, there's enough unvarnished truth here to save this book from being just another celebrity puff piece. (16 pages b&w photos, not seen)