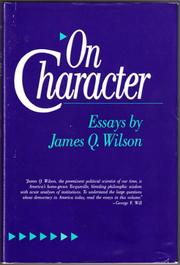 Elegantly written essays on elevating standards of behavior in today's world. Wilson (Public Policy/UCLA) is best known as a student of crime (Crime and Human Nature, 1985, with Richard Herrnstein; Thinking About Crime, 1975). His knowledge of why humans misbehave informs this group of speeches, articles, and reflections on character, by which he means good character. Empathy and self- control are major constituents of that virtue, which leads to consideration of one's neighbor without undue restrictions on one's own behavior. Wilson explores how American concepts of character were formed (via the Enlightenment) but not fired in the kiln of strong debate. He looks at government, schools, families, and biology as molders of character, and at crime, failed ethics, and arguments for the legalization of drugs as symptoms of character flaws. How can we be certain that America's youth, especially its young men, will emerge as 20th-century adults with 18th-century polish? Wilson can only guess, and he proposes a broad study of urban male children that could provide some helpful data. Labeled a neoconservative (although he demurs), Wilson pokes at liberals, sometimes with good humor, sometimes with contempt (he holds no brief for ``Palo Alto cocktail parties''). Filled with self- confessed ``gaping intellectual holes,'' the essays also occasionally show an appalling lack of empathy. For instance, in a discussion of democracy, Wilson says that the US ``functioned democratically (except for the denial of the vote to women and blacks)....'' That's quite an exception. A mÇlange of ideas, some provocative, written with grace, civility, and wit. But however appealing to readers, it presents no clear guidelines for forming character or public policy.