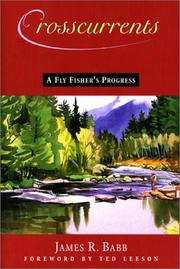 A fireside collection of fly-fishing pieces, touched with—but not drowned in—folksy wisdom and whimsy, from Gray’s Sporting Journal editor and columnist Babb. These short essays are divided into two groups: those inspired by Babb’s youth in, and return visits to, East Tennessee, and those that find him fishing here and there around the world, mostly in his current home state of Maine. A fly-fishing fool, Babb tries to make much of the clash between his roots, where the inhabitants have been characterized as “crude, kindly, ignorant, and murderous,” and the rarefied history of East Coast fly-fishing. But his pose as a homeboy from the Land of Goober often grates, as too many years in Massachusetts and Maine have spiffed up his persona. Not that he doesn’t hit upon some heavy truths in fishing——we found that the best signs of all said DANGER. KEEP OUT. NO TRESPASSING”—and in life——the most chilling words you can hear south of Mason and Dixon’s line: ‘Whut’re yew lookin’ at?”’ By the time he gets to the Maine pieces, Babb has lost his faux twang and the stories feel shorn, immediate, and tactile. There is a terrific brief catalog of months describing his first year in Maine and much fond quoting of Thoreau’s rhapsodies on the state. And there are the simple joys of the fly fisherman: a trip to hell in the far north country, searching for bamboo rods in yard sales, watching stunned as a false albacore makes his reel melt down. His humor, though, needs help. It can be enjoyably goofy (“I don’t see anything at all eccentric about bass-bugging with a Spey rod,” yet often plain stupid (“Soon we’ll see Mick Jagger pimping for denture adhesives, a laxative commercial backed by ‘I Can’t Get No Satisfaction”’). But there are pleasures ample enough here, conveyed with an infectious love of the sport.