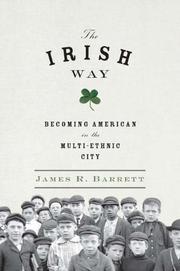 Becoming American in the Multiethnic City

Barrett (History and African-American Studies/Univ. of Illinois; William Z. Foster and the Tragedy of American Radicalism, 2000, etc.) explores the influence of Irish immigrants on nearly every aspect of American society.

Irish immigrants have always been a hardy group, particularly during the period of 1890-1930, when many of them led the country in politics, trade unions, the theater and the administration of the Catholic Church. The first wave struggled to make a life, vying with not only racism and discrimination, but also territorialism and infighting. However, they had the advantage of numbers and the ability to read and write English. They didn’t settle in small protective neighborhoods but dispersed throughout the cities, which made their presence more conducive to the acculturation of new arrivals than in the ethnic quarters. The author establishes a distinct difference between acculturation and assimilation, the former being a gradual process during which ideas and language are absorbed both from and by the neighborhood. The second generation strove for respect and acceptance by moving into the church and skilled trades. Despite priests and other church workers of different ethnic descent, particularly Italian and Polish, Irish priests and nuns controlled the church, and their native scrappiness made them leaders in the unions. By 1900, more than 95 percent of Irish Americans were literate, and they quickly learned that they could control neighborhoods simply by delivering for their neighbors, whether in jobs or protection, collecting social capital at every turn. Thus the Irish could build political machines, which were blindly followed by “simple-minded” immigrants.