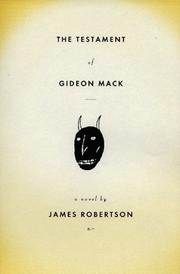 THE TESTAMENT OF GIDEON MACK

An award-winning Scottish author makes his American debut with the story of a faithless minister who befriends the Devil.

Gideon Mack does not believe in God. He gave that up as a boy, when he discovered that his schoolmates watched Batman on Sunday without suffering divine retribution, and when his own schoolyard blasphemies went unpunished. It comes as something of a surprise, then, when he decides to follow his father into the Church of Scotland. It’s even more surprising when this minister who doesn’t believe in God meets the Devil. This novel is Gideon’s life-story, from his gloomy childhood to the spiritual awakening—and rather shocking behavior—that follow his sojourn with Satan. The Devil does not restore Gideon’s faith in God—Satan himself has neither seen nor heard from his opposite number in quite some time—but he does tantalize Gideon with glimpses of supernatural possibility. He doesn’t offer Gideon salvation, but adventure. The Devil is moody and mercurial and his promises are suspiciously vague, but he is an altogether more appealing figure than the Jesus who haunted Gideon’s childhood as a sort of ghostly busybody. And, of course, the Devil has made himself present and real in Gideon’s life in a way that Jesus never did. There’s nothing radical in Robertson’s theology. The suggestion that God is dead—or, at the very least, retired—has been made before, and the Devil has been a fascinating and even sympathetic character at least since Paradise Lost. It’s true that this Devil is refreshingly free of romance, but Robertson’s real innovation is Gideon: He’s a thoroughly compelling and honestly complex character, someone who’s utterly candid about his vocational fraudulence but only fitfully aware of how dishonesty and fear rule the other aspects of his life, particularly his marriage and friendships. It is both fitting and slightly chilling that when he finally finds true companionship, it’s with the Prince of Lies.

A rich, rewarding character study in which spiritual speculation is grounded in an earthy and entertaining realism.