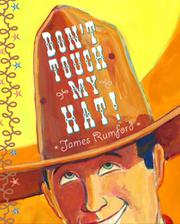 Thanks to Sheriff John and his ten-gallon hat, the town of Sunshine is a model of law and order. As long as he’s wearing his hat, Sheriff John can handle any kind of trouble the old West deals him, from cattle rustlers to stagecoach robbers. Afraid he’s nothing without his lucky hat, Sheriff John won’t let anyone, even his wife Lil, touch his talisman. Lil has a bit of a hat fetish herself and has just added a fancy new one to her collection when one quiet night there’s “trouble aplenty” in Sunshine. Without lightin’ the lantern, Sheriff John dresses in the dark and heads out to stop a fight, catch some robbers and round up rustlers. When it’s all over, he makes a big discovery about his lucky hat. Inspired by early 20th-century movie posters, the lighthearted illustrations in bold primary colors add to the story and capture the flavor and fun of the text. Wonderful end pages feature newspaper clips highlighting Sheriff John’s life. Hat’s off to this one! (Picture book. 4-8)