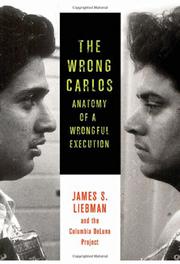 Anatomy of a Wrongful Execution

A Columbia Law School professor and some of his students gather and present evidence establishing the innocence of Carlos DeLuna, executed for murder in Texas in 1989.

Legal scholar Liebman (co-author: Federal Habeas Corpus Practice and Procedure, 2001) begins (and ends) with Justice Antonin Scalia, who famously said in 2006 that there has not been a single case of wrongful execution. Perhaps this one will change his message? The author acquired the old transcripts, interviewed many of those involved, read the newspaper clippings and watched the TV news coverage—in general, he and his team behaved as the authorities in Corpus Christi should have but manifestly didn’t. In 1983, DeLuna was accused of stabbing Wanda Lopez, a gas station clerk, and was apprehended less than an hour later. Intellectually damaged, DeLuna denied the crime from the beginning to the very moment of his execution. Liebman and the others discovered that there was another Carlos—Carlos Hernandez—who was patently guilty. He and DeLuna looked a lot alike, but the violent Hernandez, a career criminal who later died in prison, carried (and often used) a knife and later told more than one person that he had actually committed the murder. Liebman’s team went over the physical evidence thoroughly (there was none connecting DeLuna to the case) and tacitly and explicitly accuse the Corpus Christi authorities of a rush to judgment. The author offers numerous photographs, charts and other documents (some are from police reports and trial evidence), as well as a website that presents much more of it. The chapter about DeLuna’s execution is wrenching. Liebman concludes with thoughts about how something like this could happen—and what we need to do to prevent it from happening again.

Death penalty opponents now have a definitive example to cite; death penalty proponents have an agonizing case to consider.