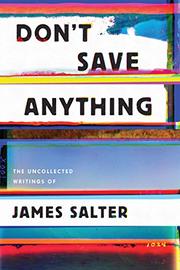 Previously published but not collected until now, these magazine pieces reflect the author’s wide range of experience and interests as well as his prose mastery.

Salter (1925-2015) was best known for his fiction (All That Is, 2013, etc.), but these essays not only reflect a prolific career in literary journalism, but also show how much magazines have changed in the last half-century or so. There’s an insightful interview with Nabokov, one that extends well beyond Lolita and which had to be written from memory because the subject, already reluctant, wouldn’t allow notes. It ends on this autumnal note: “The light is fading, there is no one else in the room or the room beyond. The hotel has many mirrors, some of them on doors, so it is like a house of illusion, part vision, part reflection, and rich with dreams.” What a surprise to learn that this was a 1975 assignment for People, which no longer would be expected to publish such a writer on such an author. These aren’t selections from literary journals but rather from travel and food magazines and other general-interest publications. A West Point graduate and Korean War fighter pilot, Salter chronicles the changes in that institution and his near-death experiences. He also writes of his decision to leave the military and devote himself full time to his writing, hoping that he could somehow support his wife and family. “It was the most difficult act of my life,” he writes. But it paid off, not only in literary acclaim, but in sidelights such as writing for the screen and the theater (the subject of “Passionate Falsehoods,” a deliciously acerbic 1997 New Yorker piece about observing from the periphery of the film world) and making documentaries. “There is something called the true life,” writes Salter, “which I cannot describe and which perhaps varies as one sees it from different angles and at different times.”

Taken together, these pieces attest to a true life, a life well-lived and well-written.