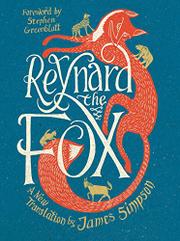 Timely translation of the medieval story cycle about a fox who constantly outwits the “not only dim-witted but also greedy, coarse and self-interested” folks in charge.

Reynard the Fox rolls up all the best wiles of Odysseus, Harpo Marx and the Coyote of North American Indian mythology; he’s a trickster, a court jester and a buffoon who, somewhat freer to speak truth to power than the rest of us, shows time and again that the emperor’s clothes are threadbare. The exiled English printer William Caxton understood this, and his 15th-century translation of the Old French Roman de Renart, though subtle in its satire, made it plain “how clever subjects can survive enemies and kings.” So Greenblatt writes in his introduction to this new translation by Simpson (English/Harvard Univ.), which properly places the stories about Reynard, which emerged as long ago as the 1100s, in the tradition of Aesop and other fabulists. Simpson’s translation is fully serviceable, though there are some oddly herky-jerky clashes of diction scattered throughout: “Cousin Reynard, now’s the time to open up your bag of tricks: if you’re so clever, I suggest you help yourself. You’re in a fix, buddy.” “The wolf said: ‘Just listen to this guy! I’m the one who’s suffered and have cause to complain, and he wants me to pay him!’ ” If the characters sound like Sir Walter Scott at one moment and Lou Costello the next, that doesn’t diminish the bite and force of the stories, which, though surely not to everyone’s taste, are plenty of fun to read—especially when Reynard, having outwitted Lion and Wolf and Cat and every other creature in the French barnyard, finally talks himself into a cushy government job, at last securing a sinecure to guard the henhouse.

Those who are able to navigate early modern English would do better to read Caxton, but this new version has the virtue of making the Reynard stories easily accessible.