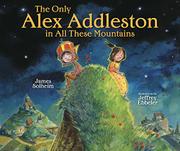 THE ONLY ALEX ADDLESTON IN ALL THESE MOUNTAINS

When Alex Addleston arrives for her first day of kindergarten, she’s pleased to find a desk with her name on it. But there’s a boy sitting there, and he’s wearing an identical name tag. He even looks quite a lot like Alex. What the female Alex finds in the male Alex (and vice versa) is a best friend and sidekick. The duo gathers blueberries in the daytime and lightning bugs at night. They do everything together, finding frogs and turtles or pretending to be robots or astronauts. In the summer, Alex the boy goes on a trip to Chicago to see his grandma; when he returns, he learns that Alex the girl has left for Africa with her father. That night, both lie staring up at the stars, he on Flatt Mountain and she in a Kenyan savanna half a world away. Six years pass, with many separate adventures for each. And one night, while both are out catching fireflies, they meet again. And it’s like they were never apart. Solheim writes gracefully, but his apparent message is undermined by a disjointed story full of gaps that will puzzle youngsters—why, for instance, do the two children apparently forget each other after one page turn? Extraneous details further muddy the waters.