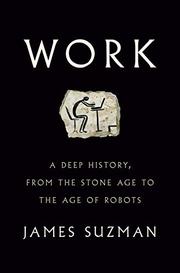 A Deep History, From the Stone Age to the Age of Robots

An essential feature of our lives receives an ingenious analysis.

All living organisms expend energy (i.e., work), but humans have transformed this with spectacular creativity that began with stone tools and led to cities, nations, and networks of energy-hungry machines. Anthropologists specialize in describing this process, and Suzman delivers a delightful account of their findings without ignoring the occasions when colleagues missed the boat. For more than 1 million years, our ancestors’ major tool was a crude, difficult-to-manipulate chipped-rock hand ax. Gathering food undoubtedly required its use, but that was also a laborious process. Gorillas eat 15% of their body weight per day and spend half their waking hours foraging; human today eat 2% to 3% thanks to fire, man’s greatest labor-saving invention. Cooking vastly concentrates food energy, so evolution shrank our jaws, teeth, and guts and grew our brains. Experts once taught that hunter-gatherers led exhausting lives on the edge of starvation. Then studies revealed that they didn’t work hard and ate better than cultures that followed. Once agriculture developed, work became grueling but produced quantities of poorer quality food that supported cities, cultures, governments, and innumerable trades. Animals provided almost all human nonfood energy until the 18th century, when the Industrial Revolution produced an explosion of power for industry and transportation. In the early 19th century, electricity transformed domestic life. The 20th-century computer revolution assumed much of human brain work, and 21st-century artificial intelligence has upset many observers who conclude “that not only were robots already queuing at the factory gates but that they had fixed their beady little robot-eyes on nearly half of all existing jobs.” Ironically, as Suzman demonstrates near the end of this educative and entertaining book, this energy bonanza has not led to the life of leisure that futurists predicted. In the U.S., working hours have actually increased, and technology’s profits mostly enrich a small minority who already enjoy a high income.

A fascinating history of humankind as a consumer of energy.