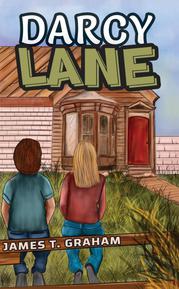 In this slice-of-life novella set in Lancashire, England, a young woman with a tragic past cultivates a dream of security and comfort that her destitute life seems unlikely to deliver.

Little Elise Rose is only 7 years old when she witnesses her mother Grace’s brutal murder at the hands of one of the many men who regularly bring trouble into their lives. This horrible night of violence cuts short Grace’s attempt at a new start in a low-income housing project, living under the protection of her father, Emmett, a shop owner who adores his daughter and granddaughter. It also sets Elise on a downward spiral that leads to her eventual commitment to a mental hospital for two years. She is 20 when she is deemed well enough to be released, “unsure if this was the start of something new or the continuation of something old and troublesome.” Returning to the home she shared with her grandfather, Elise teeters between the hope of a new life, symbolized by a snug cottage she sees on Darcy Lane at the end of a bus line, and the self-destructive habits that lead her back to the Phonebox, the alley bar frequented by her old associates. Two influences seek to tip the balance: her mother’s journal, left for her in hopes that Elise might profit from Grace’s mistakes, and Jack Clapham, a shady character who is likely to prove dangerous. Graham’s compact narrative is well crafted, evoking the pervasive hopelessness of working-class life, in which dead-end poverty leads all too often to crime and violence and people drift passively and repetitively into trouble. Hope appears in garden imagery, interwoven throughout the text in Grace’s and Elise’s “daisy blonde hair,” the ritual visit to the mental hospital’s garden before the latter’s release, and the peace and normality represented by the unattainable cottage on Darcy Lane. But Elise’s submissiveness is frustrating, and the work’s short length necessitates the underdevelopment of certain plot elements, such as the importance of Grace’s journal. Still, captivating snatches of phrases, like the description of Emmett as “a hunch of a man,” paint a vivid picture of the difficulty of life in an English housing project.

A bleak but eloquent portrait of a woman’s attempts to survive poverty and violence.