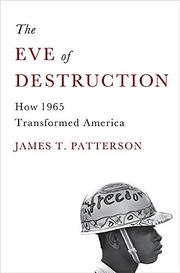 THE EVE OF DESTRUCTION

Lighting the National Christmas Tree in 1964, President Lyndon Johnson declared these “the most hopeful times…since Christ was born in Bethlehem.” Nobody laughed. Near the end of the ensuing year, the nation’s political and social consensus had unraveled to the point that a protest song called “Eve of Destruction” topped the charts. Again, nobody laughed. Patterson (History Emeritus/Brown Univ.; Freedom is Not Enough: The Moynihan Report and America’s Struggle over Black Family Life from LBJ to Obama, 2010, etc.) traces the cracks in the cultural zeitgeist, when Sinatra gave way to the Rolling Stones, when TV news exploded into color, when The Sound of Music made room for James Bond and Thunderball, when the feel-good Beatles turned pensive, when Dylan went electric. The author’s at his best, though, tracking the year’s political developments. During a period of unprecedented economic prosperity, Congress enacted transformative legislation covering immigration, employment, voting rights, health care and education. At the same time, Selma, Ala., became infamous, and Watts erupted in riots. A baffled Johnson wondered how this was possible. More than anything, the military escalation in Vietnam accounted for the growing unrest. Loath to jeopardize his Great Society programs with an open debate on the war and unwilling to “lose” Vietnam, the president gradually increased the bombing and the troop commitment. The “Credibility Gap” between the president’s words and deeds in Vietnam helped supercharge peace demonstrations that would ultimately overwhelm his presidency. Patterson’s sketch of an agonized Johnson perfectly mirrors the nation’s descent from smug self-assurance to puzzlement, peevishness and, finally, anger.

A useful time capsule that explains the social fragmentation, political polarization and tumultuous mood swing of a pivotal year in American history.