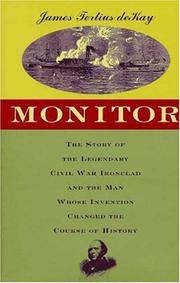 The history of the USS Monitor, written with panache, sophisticated understanding, and attention to detail by deKay (Chronicles of the Frigate Macedonian, not reviewed). The Monitor may have been a ``doughty little Civil War ironclad,'' as deKay writes, but it was an elegantly minimalist mechanical marvel, a milestone in naval technology, with a design so original (including a revolving turret), it had 40 patentable innovations. At a time when naval strategy relied upon ships of the line—colossal square riggers with 120 guns and a crew of up to 1,200—the Monitor was a freak and a harbinger: armor-clad, steam- powered, with a mere two guns and a crew of 58. It was hardly the first of its kind—the king of Syracuse had an armor-plated vessel in the third century b.c., and Fulton's Clermont was steaming along in 1807—yet it was the right ship, in the right spot, at the right time. DeKay tells the Monitor's story with building suspense: It was the brainchild of the Swedish engineer John Ericsson, which became the best hope of the Union forces to maintain a critical blockade at Hampton Roads, Va. Finally, the author relates the wicked confrontation with the Confederate's ``awesome dark monster,'' Merrimac, another ironclad whose tale deKay sharply limns. It was a standoff at first, then the smaller Monitor exploited its opponent's unwieldiness to gain ascendancy. DeKay's tale is a richly brocaded one, serving up the sweetheart deals and political shenanigans that marked the Monitor's progress; elaborating on the rumors that flew before the epic battle like expectations before a championship heavyweight fight; bringing into play the weather and tides and most any other thing that touched upon events. This book is, simply, a little treasure. (25 b&w illustrations, not seen)