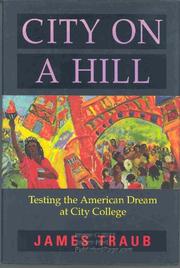 CITY ON A HILL

Eschewing hand-wringing and political rhetoric for close, critical observation, freelance journalist Traub (Too Good to Be True, 1990) delineates a unique—and uniquely representative- -institution: New York's City College. Traub spent a year observing classes at City College's Gothic Revival campus, which sits atop a hill in Harlem. Founded in 1849 as an egalitarian experiment, tuition-free City College came into its own when the great turn-of-the-century tide of Jewish migration provided it with cohorts of driven students. Their legendary successes—a record number of Nobelists and intellectuals such as Irving Howe—made it a beacon of educational possibility for the nation. A confluence of social and political upheavals, however, brought radical changes in the 1960s, key among them guaranteed admission for graduates of New York City high schools to the City University of New York, of which City College is a part. An exploration of the drastic results of this ``open admissions'' policy constitutes the main part of Traub's book. After limning the ideological conflicts that still continue among the faculty and in the press, he introduces us to its ramifications in City College's classrooms. We meet a range of teachers, from dedicated idealists, struggling to reach woefully under-prepared students while maintaining some semblance of academic standards, to the controversial Afrocentrist professor Leonard Jeffries, whose authoritarian anti-intellectualism Traub exposes as he captures the human, even tragic dimension of Jeffries's sway over uninformed followers. Empathetic portraits of City College students stand at the book's center. Many flounder in remedial courses; difficult family situations and looming financial disaster burden most; the dedication of contemporary immigrants provides some hope. But Traub's ultimate accomplishment is to reveal the consequences for one legendary college of the inadequacy of our urban high schools and vocational training, and our general devaluation of learning. The crisis continues—and as goes New York's City on a hill, so goes the nation. Exemplary reportage, essential for all those debating the future of American college education.