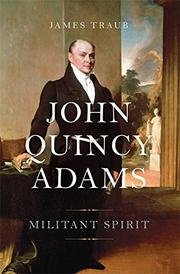 The life of an early American statesman and president who served as the young nation’s strenuous conscience.

Traub (Foreign Policy/New York Univ.; The Freedom Agenda: Why America Must Spread Democracy (Just Not the Way George Bush Did), 2008, etc.) thoroughly explores the life of John Quincy Adams (1767-1848), a “hard man” of deep erudition and conviction who descended from the American aristocracy and learned at the knees of an exacting father and mother what the great American governing principles meant for world leadership and peace. The author emphasizes his subject’s long, somewhat reluctant middle career as a diplomat, from his first posting in 1794 to the Hague to St. Petersburg and then to the Court of St. James during a turbulent time in European history. Breaking with his father’s Federalist Party over its Anglophilism at a time of trade and shipping tensions with Britain, Adams pursued an admirable, if tendentious, course of nonpartisanship over the course of his political career, from senator to secretary of state (under James Monroe) to one-term president to Massachusetts congressman (he was the first and only ex-president to serve in Congress). Traub examines how much Adams contributed to what became known as the Monroe Doctrine. “What Adams may have contributed most…was its astringency,” writes the author. Although Adams was a proponent of American expansion, he became intensely concerned at the question of admission of slave versus free states in the Missouri Compromise of 1820. During the latter part of his life as a congressman, he “seized the role of chief tormentor of the slavocracy” and represented in front of the Supreme Court the mutinous African captives aboard the Amistad. Most of all, Traub depicts a fully fleshed character, an extraordinary man driven by his birthright principles, a voluminous diarist, scholar, poet, polymath, eccentric, and iconoclast. The author also offers a masterly portrait of Adams’ wife, Louisa.

An impassioned biography of “a coherent and consistent thinker who adhered to his core political convictions across his decades of public service.”