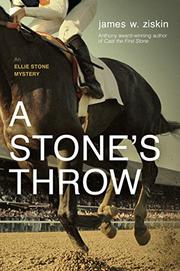 Upstate New York reporter Ellie Stone’s trip to a burning barn takes her outside her comfort zone in more ways than one.

Although Joshua Shaw made a name for himself back in the 1920s breeding and racing thoroughbreds, the Shaw family hasn’t used Tempesta Farm for years, and Ellie’s trip out there to cover a fire in one of the estate’s 40 barns one morning in August 1962 might have proved a waste of time if her poking amid the embers hadn’t disclosed two charred corpses. The victims seem well beyond identification, but the male has been shot, the female strangled, and the fire deliberately set. That’s plenty to interest readers of the New Holland Republic and maybe even publisher Artie Short, who still finds it hard to take a girl reporter seriously. Sheriffs from two different counties take an interest in the case, but it’s Ellie who digs up the leads that eventually identify the victims as Johnny Dornan, a jockey for Louis Fleischman’s Harlequin stables, and Vivian McLaglen, whose ties to Johnny go back a long way through some dark patches. Also missing is Micheline Charbonneau, a lady of the evening whom Lou had hired to entertain Johnny on what turned out to be his last night on Earth. A note Johnny left scrawled in a newspaper left behind in his lodgings—“Robinson S Friday midnight”—promises further illumination and, indeed, turns out to hold the key to the case, but few readers will decipher its import before Ellie. Tested by both her dogged pursuit of a story with deep roots and her relationship with Virginia aristocrat Frederick Carsten Whitcomb III, whose socialite mother turns out to be as anti-Semitic as his blue-blooded buddies, Ellie comes up trumps.

The detective work is unspectacular but conscientious, absorbing, and believable, and the unblinking heroine’s clearheaded first-person narrative is never less than appealing.