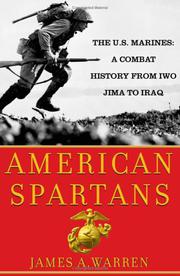 A Combat History from Iwo Jima to Iraq

A laudatory history of the Leathernecks, whose fortunes have taken them to every corner of the world.

Marines, as military historian Warren (Cold War, 1996, etc.) shows, don’t mind being known as men (and now women) who roam the planet breaking things and ending lives; it is dogma that there is “no better friend, no worse enemy” than a Marine. Or, as one of Warren’s interviewees remarks in a fine definition of esprit de corps, “If you kill Marines, one thing is for sure: there will be other Marines coming along soon, and they will keep coming until they find you.” After touring the ego-destroying machine that is basic training, Warren turns to the bloodiest moment in Corps history, the invasion of Iwo Jima, in which 25,000 were killed or wounded; it was this terrible fight, Warren suggests, that lent the Corps some of its self-image and certainly much of the public estimation that it has enjoyed since. The Korean War provided more opportunities to be bloodied and to bloody the enemy, a theme that would provide something of an official mantra in Vietnam the following decade; Warren quotes one Marine commander as saying, “We’ll just go on bleeding them until Hanoi wakes up to the fact that they have bled their country to the point of national disaster for generations.” It didn’t quite work out that way, as it may not be working out that way in Iraq, where Warren’s account ends. Along the way, from battle to battle, Warren considers changes in Corps doctrine and the evolution of strategy and tactics, all intended to reinforce Marine supremacy as a fighting force and its relative rarity as a service branch that has mastered the skills of every other branch to fight in just about any theater on the globe—and in no time flat.