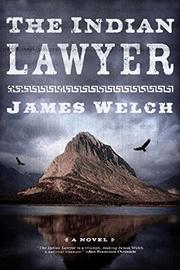 He's more than a lawyer, in fact--Sylvester Yellow Calf is a rising star in Montana politics until ensnared in a con's blackmail scheme; Welch's latest combines a suspense story with the odyssey of an Indian professional in a white man's world. We start with the con, 37-year-old Jack Harwood, decent family, college graduate, two armed robberies; married to a good woman, Patti Ann, waiting faithfully for him out there in Helena. Jack, a model inmate, just hasn't been the same since being stabbed by some Indians, and when he's turned down for parole, he's desperate enough to ask Patti Ann to get the dirt on Sylvester, a parole-board member, and one of Helena's top lawyers. Sylvester was raised on the Blackfeet reservation but, even as a high-school basketball star, found himself (to his concern) becoming distanced from his own people; now, part of Helena's power elite, and involved with a white woman, Shelley Hatton, the smart, attractive daughter of a former state senator, he is even more removed. So when his boss, senior partner and Democratic kingmaker Buster Harrington, urges Sylvester to run for Congress, the idealistic lawyer goes along, seeing an opportunity to serve his people. By now, though, Sylvester has compromised himself, having slept with Patti Ann (who had presented herself as a client) during a cooling. off with Shelley. As Sylvester announces his candidacy, Welch ratchets up the pressure by bringing two more (recently released) cons into the action, threatening both Sylvester and Patti Ann; then suddenly the tension drains away, in a disappointing climax. Welch's previous novels dealing with Native Americans in the West have won high praise, so the final detail here comes as no surprise: the hard-edged prison scenes are superb. Where the writing goes soft is in the Sylvester-Shelley relationship; their estrangement at a dude ranch, though essential plot-wise, doesn't quite ring true, nor does Sylvester's failure to keep Shelley by his side as he enters big-time politics. Still, well worth reading as suspense-with-a-difference, solidly anchored in interesting terrain.