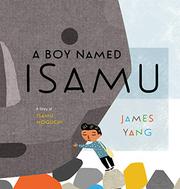 A Story of Isamu Noguchi

If you were a boy named Isamu…what would you learn about your world?

Beginning with the whimsical jacket design that’s echoed in the shapes, colors, and prose that follow, readers are encouraged to experience finding their own voices in quiet spaces. Isamu, a young boy with beige skin and black hair, feels overwhelmed in the crowded and noisy market—a patchwork of stalls, merchandise, and people. Instead he seeks out colorful paper lanterns, a still wood where leaves crunch, a field of grass, a rocky beach, and more. Using the second person, the narrator invites readers to imagine themselves as Isamu, asking his questions and immersing himself in the natural world using his senses. Whimsy is woven throughout, appearing even in a large gray stone with a face that is echoed on the dust jacket. Colorful lines of all forms dominate the design of the spreads—straight bamboo stalks, rounded stones that look like birds, a wavy outline in rock that frames the sea—all carefully rendered in bold colors balanced by plenty of white space. Yang depicts Isamu in proportion with his wonder at the world, by turns prominent and peripheral. The author’s note explains how Isamu Noguchi’s biracial background (his father was Japanese and his mother was a White American) led to ostracization in both Japan and the United States, prompting him to seek out safe, natural spaces that eventually inspired his artwork, based in stone and wood. (This book was reviewed digitally.)

A marvel of prose, illustration, and design that invites repeated meditation.