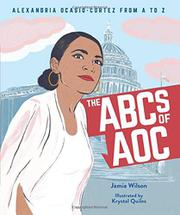 THE ABCS OF AOC

Alexandria Ocasio-Cortez From A to Z

In a misapplied apparent effort to reach two tiers of future voters, Wilson runs through the alphabet twice, assigning a character trait or, more often, broad issue to each letter—“Democracy” and “Jobs” on up to “Xenophobia” and, finally, “Zeal”—and unpacking it…briefly at first, then later, on a second go-round, in slightly more detail but at the same general reading level. Thus, under A for “Advocate,” readers learn that “Representative Alexandria Ocasio-Cortez works to enact laws that will change lives for the better” in her community, and then, in the second alphabet, that she has a progressive platform and a Green New Deal. Unfortunately, the author renders moot her own argument that AOC is a true “Revolutionary” rather than just a “reformer” by describing how she won election to “Congress” by gathering “Grassroots” support, backs at least most of her chosen party’s policies, and places high value on “Teamwork.” Aside from mentions of the Afro-Latinx representative’s Bronx childhood and Jewish forebears, her family and private life remain largely unexplored. Leaving the second alphabet a set of boxed narrative blocks, Quiles illustrates the first with scenes of Ocasio-Cortez dancing, speaking, or hanging out with racially diverse supporters in urban settings.

Ocasio-Cortez may be a “trailblazer” who “walks her talk,” but this is addressed to readers who already know that.