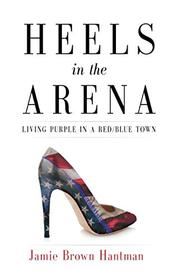 HEELS IN THE ARENA

Living Purple in a Red/Blue Town

An insider shares her experiences climbing the Washington, D.C., power ladder, ultimately reaching the position of special assistant to the president for legislative affairs and working in the White House.

Hantman begins her debut memoir with a grabber that’s hard to top: “It’s a Friday in November 2005, and I’m at work. Today that means I’m sitting on Air Force One in the office of the President of the United States, who is sitting at his desk across the cabin from me.” She was at the pinnacle of a career that was sparked at a small Ohio college, where she majored in prelaw. The college’s admissions director offered her a ticket to the George H.W. Bush presidential inauguration: “I was as excited as you can imagine a bookworm, prelaw, watch-Congressional-hearings-in-the-pool type of girl would be.” From that point on, her goal was to work in Washington. She scored a summer internship with Connie Mack, a newly elected Republican senator from Florida; went to law school at Georgetown; and, in 1994, was hired as Mack’s legislative counsel. The author describes these years with her usual mix of respect for the work and enjoyable, equal-opportunity snark: “The new Speaker of the House was Newt Gingrich, who cared about comity and bipartisanship about as much as a Kardashian cares about particle physics.” Next came a four-year stint at a law (lobbying) firm with a “powerhouse government affairs practice.” In 2002, she became Attorney General John Ashcroft’s deputy assistant attorney general for legislative affairs. Later, she was appointed special assistant to President George W. Bush. The engaging book is filled with bold name politicos (and a host of Hollywood glitterati). Dozens of rich, carefully curated anecdotes include some that are certainly unflattering to a few bigwigs, although they are never salacious. Those who favor the left side of the aisle are likely to be dismayed by several of Hantman’s accomplishments—she was instrumental in ushering Supreme Court Chief Justice John Roberts and Associate Justice Samuel Alito through their confirmation hearings. But she was not a total partisan: During those years, she was dating (and later married) Democratic Sen. Charles Schumer’s chief of staff.

A fun memoir for political junkies of all stripes.