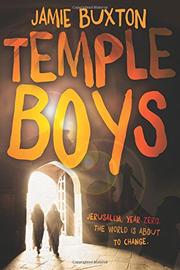 A sneaky beggar child enters the circle of Yeshua of Gilgal in the six days surrounding the crucifixion.

Flea is a filthy, ignorant street child in the Holy City, the most bullied and ostracized member of a gang calling itself the Temple Boys. The new magician riding into the city on a donkey is just one more excuse for the rest of the Temple Boys to abuse and abandon Flea, but the magician's best friend, Jude, enlists Flea for a mission of his own. Jude wants to protect his friend and prevent the anti-Roman, anti-Temple political movement from turning into a bloodbath, but Flea only wants food, warmth and a little respect. Though he admires Yeshua's sleight of hand and cunning, Flea doesn't understand why Yesh seems sanguine about his own potential death. Readers with knowledge of the Gospels will catch the many sideways references and thinly disguised names: Yesh's brother is named Yak; Shim denies Yesh; Yesh buries old Laz alive; Jude reminisces about that time they "smuggled the booze into that boring wedding...in a water jug." These readers need to be prepared to read about Jesus as a lying con man who's a master of confidence games and is willing to use children as human shields. The ideal reader of this existentialist retelling is likely substantially older than naïve-if-bitter young Flea.