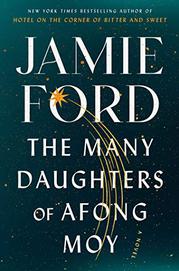 THE MANY DAUGHTERS OF AFONG MOY

Embedded images—airplanes, ships, waves—and the occasional ghostly vision highlight how these women’s lives reverberate as the focus moves back and forth in time. In 1942 China, Faye Moy, a nurse in her 50s who’s working with American forces, feels an eerie connection to a dying young pilot in whose pocket she finds a newspaper photograph of herself as a teenager and a note in her own handwriting that says, “FIND ME.” Finding oneself and/or one’s soul mate becomes the throughline of the book. Faye’s great-grandmother Afong Moy, the first Chinese woman in America, dies in childbirth after a short career being exhibited as a curiosity in the 1830s. Faye’s mother, Lai King (Afong’s granddaughter), sails to Canton after her parents’ deaths in San Francisco’s Chinatown fire of 1892. Onboard ship she bonds with a young White boy, also an orphan, and nurses him when contagion strikes. When Faye is 14, she has an illegitimate daughter who is adopted and raised in England. Presumably that girl is Zoe Moy, who, in 1927, attends the famously progressive Summerhill School, where a disastrous social experiment in fascism destroys her relationship with a beloved poetry teacher. In 2014, Zoe’s emotionally fragile granddaughter, Greta, loses both her skyrocketing tech career and the love of her life at the hands of an evil capitalist. While several earlier Moys receive aid and guidance from Buddhist monks, Greta’s troubled poet daughter, Dorothy, turns to both Buddhism and radical scientific treatment to uncover and understand how past crises, emotional, physical, and spiritual, are destabilizing her current life in 2045. Expect long treatises on anamnesis, quantum biology, and reincarnation before traveling with Dorothy’s adult daughter in 2086.

Ford raises fascinating questions, but a rushed ending too neatly ties up the answers in an unconvincing, sentimental bow.