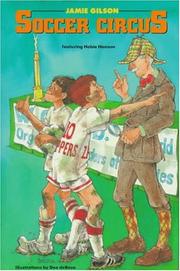 Though Hobie didn't really mean to miss his dental appointment or to ride his bike through wet cement, his father says he'll have to pay for repairing the cement; moreover, his behavior had better be perfect on the soccer team's overnight trip. Hobie really does try—it's not his fault that he wrecks a wedding at the motel where the team stays: the clowns performing at the wedding asked Hobie to wear the penguin suit, and he does his best to convince Mr. Crook that he's not part of the murder mystery weekend that's also going on. Gilson quickly establishes characters and conflict in this latest fast-paced story about the popular Hobie; fans will recognize familiar characters like know-it-all Molly and RX the tease. The plot hangs on an unlikely number of coincidences, but there's a lively blend of sports, mystery, and laughs: the dialogue's both funny and believable, while some of the antics— like playing elevator tag—are hilarious. (Fiction. 9-12)