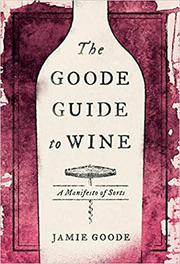 THE GOODE GUIDE TO WINE

A Manifesto of Sorts

British wine journalist Goode stakes out a case for making and drinking the best wine possible, which needn’t mean expensive.

“Where should wine be heading?” So asks the author, a longtime columnist for the Sunday Express with a doctorate in plant biology and an artistic bent. He’s been at it for years, but he still remembers the cheap plonk of student days—and of working people such as the Portuguese farmhands who took slugs of it to slake their thirst while working. “These wines are just wine,” he writes, “and there’s an honesty to them.” Alas, these inexpensive and unpretentious “just wines” are disappearing since everyone now lives in trendy cities, and, as he puts it, “we want wine to taste nice.” Nice means expensive, more expensive, at any rate, than cheap wine. The meaning of the “manifesto” of Goode’s subtitle unfolds as his mostly genial, mostly short essays proceed: Growers should grow grapes that belong to a particular climate and soil—thus the much vaunted “terroir” that sophisticates speak of in hushed tones—without futzing about too much. Consumers should take the time to learn about wine on their own, without relying on tasting notes (“Tasting notes are horrible and I hate them”) and by engaging all their senses save the ability to use language: Experience the wine, he counsels, before attempting to put that experience in words. Wine depends on microbes, dirt, and knowledgeable growers and drinkers, so the more one knows about it, the more likely one is to make the right choice for the mood or one’s company or accompanying meal. The payoffs are abundant, Goode notes in the middle of a manifesto that’s more encouragement than exhortation, for, as he happily notes, “there’s never been a better time to be a wine drinker.”

Oenophiles and vintners alike will find provocations, lessons, and pleasures in these smartly opinionated pages.