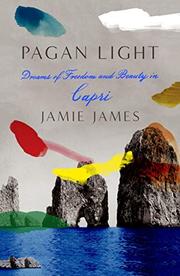 Dreams of Freedom and Beauty in Capri

Part travelogue, part history, and part literary analysis, this book pleasantly meanders through the lives of foreigners who have, over the centuries, decamped to the little island of Capri to find sexual and artistic freedom.

Indonesia-based arts writer James (The Glamour of Strangeness: Artists and the Last Age of the Exotic, 2016, etc.) makes the convincing case that “since antiquity, Capri has been a hedonistic dreamland, a place where the rules do not apply: a Mediterranean prototype of Las Vegas.” This “limestone rock four square miles in extent,” far enough off the coast of Italy to make for dangerous travel before the 20th century, attracted Roman emperors looking for scenery, peace, and sensual pleasures. The author carefully untangles the various stories about Tiberius, portrayed by some as a “paranoid, bloodthirsty monarch, driven by perverted lust” and by others as a wise ruler in search of solitude, and settles on a middle ground between the two. After Rome, James dashes through the late 19th and early 20th centuries, a period during which a wide range of writers found their ways to Capri and started writing about each other in a kind of literary hall of mirrors. Many moved there to avoid persecution for homosexuality at home; others, to indulge in sex with children and adolescents. One of those with “a mania for young boys” was novelist Norman Douglas. Though little known now, he was the author of the bestselling South Wind, from which this book derives its title. As James roams around the island taking in mansions built by wealthy expatriates, he also examines the lives and works of lesser-known Capri novelists, such as the flamboyant Jacques d'Adelswärd-Fersen, an admirer of “trashy romantic fiction,” in whose work “nuance is easily lost amid the dense classical allusions, perfumed tropes, and extravagant homages to adolescent flesh.”

A colorful, captivating literary companion for those visiting the island and a peek into the lives of some figures largely faded from history.