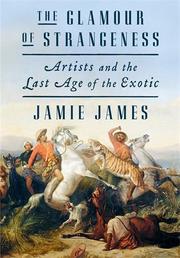 THE GLAMOUR OF STRANGENESS

Artists and the Last Age of the Exotic

Six artists in quest of the exotic.

Throughout his career, novelist, cultural critic, and travel writer James (Rimbaud in Java: The Last Voyage, 2011, etc.) was drawn by “the romantic allure” of the mysterious and remote; since 1999, the Houston-born writer has made a home in Indonesia. Like the artists he profiles in this richly detailed, absorbing cultural history, the author well understands the motivation of “exotes,” “an elite group of travelers who seek to immerse themselves in otherness.” His major focus is on painters Paul Gauguin, Walter Spies, and Raden Saleh; writers Isabelle Eberhardt and Victor Segalen; and filmmaker Maya Deren. All from different places, they shared a cosmopolitan background, confused cultural identity, unconventional private lives, and an overwhelming desire to reinvent themselves. Gauguin, “sexually frustrated and perpetually in debt,” left France for Tahiti, intent on starting a new, liberated life but always with an eye on the Paris art market. James sees him as “a pioneer of a new vision of travel as a one-way proposition.” Like Rimbaud before him and Spies after, he was motivated “more by a disgust with the homeland than by an informed attraction to the new home.” Unlike James’ other subjects, who fled from the stultifying materialism of Western culture, Saleh, “an enthusiast who fervently idealized Europe and European ways,” left Java for Germany, where he became a dandy, painting and socializing with aristocrats. Handsome, blond Spies left his famous lover, filmmaker F.W. Murnau, in Germany when he sailed to Bali, where he “created a cosmopolitan social whirl of his own,” with guests who included Charlie Chaplin, Noel Coward, and Leopold Stokowski. James does not argue for the artistic greatness of his lesser-known characters, but they prove to him “that cultural identity can be a choice,” pursued with joy.