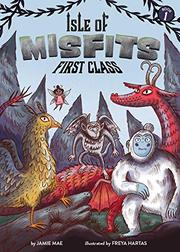 From the Isle of Misfits series, volume 1

A gargoyle with a broken horn finds both work and a team at a secret school for mythological creatures.

Though properly taught to protect buildings and their residents (gargoyles’ function as rainspouts go unmentioned), Gibbon has been driven by boredom into dropping snowballs onto passers-by and like pranks. Suddenly, though, he’s whisked off to the Isle of Misfits, where the young and the restless are gathered to learn how to be better adjusted (“proper monsters”) and to appreciate the value of teamwork. It’s a whole new world for him, and he quickly bonds with four fellow students—a fairy with anger issues, a big and clumsy dragon, a yeti dude with a man bun, and a gentle griffin who can’t get the knack of flying. Initially, monkeylike Gibbon messes up an obstacle relay race by trying to take all the legs himself, but then at a later one he works with rather than against his friends to earn second place…or, as it turns out, first, because their malign, bullying competitors (“a green troll, a hairy gremlin, a slimy ghoul, and a baba yaga”) cheated. The prize is to skip class for a “mission” (see next episode). With rare exception, everyone in both the narrative and Hartas’ flurries of small sketched scenes seems to belong to a different species; fairy Fiona is depicted with brown skin. Despite their outward forms they’re all standard-issue kid types, if not stereotypes, and as unvarnished as the heavy-handed values education: “You need to learn how to work with your team, Gibbon. Your slacking off only makes it harder for the rest of us.”

A particularly rough-hewn addition to the “magic school” shelf, with very little magic in sight.