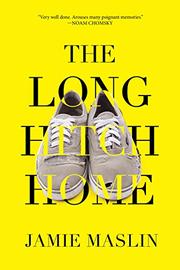 An ambitious, uneven account of hitchhiking across three continents, from a smart but surprisingly immature British travel writer.

Beginning on the island of Tasmania in Southern Australia, Maslin (Socialist Dreams and Beauty Queens: A Couchsurfer's Memoir of Venezuela, 2011, etc.) set out to travel home to London relying entirely on free rides from strangers. The author spends just as much time describing the characters he met—with their strange customs and languages—as on painting a full picture of the places he visited. After recounting a ride that delivered him “into the Indonesian equivalent of the Sopranos,” Maslin devotes an entire chapter to describing what he sees as key in understanding modern Indonesia: “the bloody legacy of the country’s former dictator…and the role Western governments…played in his rise to power.” The author’s use of footnotes helps him expand on and support his opinionated political views and well-researched accounts of history, which give context to his personal experiences. He also employs footnotes less seriously—e.g., when a Thai man asked about the size of a certain body part of Maslin’s, his response, “Erm, sufficient,” is accompanied by this footnote: “Remember that British understatement a moment ago?” The author’s boyish humor and privilege can come across less than favorably, such as when he throws a “petulant” fit at a local tour operator or the ways in which he refers to women—e.g., a language confusion in China resulted in “a rather worn-looking middle-aged woman in high heels…classic mutton dressed as lamb” appearing at his hotel room door.

Readers who have been waiting for Tucker Max to travel more fully will be thrilled to discover Maslin’s antics, which will likely turn off some readers. However, those charmed by the author’s guile and those who choose to push past their annoyance will be rewarded with an honest and gripping travel narrative.