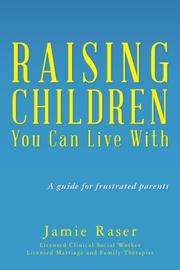 Raising Children You Can Live With

A Guide For Frustrated Parents

Raser’s debut is a valuable tool for handling the most difficult job in the world: parenthood.

“[W]hen you are miserable and your children are too, this book may help you understand how things went wrong and how you can make them better,” Raser explains in this guide’s introduction. He asserts that parent-child problem are rooted in an imbalance between what se calls the “Business” (rules, guidance, discipline) and the “Personal” (care, love, fun) sides of the parenting equation. A seesawing pattern tilts things one way or the other, which can create real power struggles, especially when a child sees only the Business side. These can result in power deficits, he says; the negatives can slowly add up so that even one misplaced word can lead to a major screaming match. Raser suggests using “Strategic Interactions,” in which a child is given room to maneuver so that parent directives aren’t interpreted as power struggles. Diving into various real-world situations in short chapters, such as “What Do I Do When My Child Lies?” and “What Do I Do When My Child Won’t Communicate?,” the book gives examples of typical parent-child dialogues and outlines elements of Strategic Interactions to decrease ill will. Phrases in the Strategic Interaction dictionary (such as “I never thought of it that way before” and “I’m not sure I understand. Could you tell me more about it?”) may help kids see that parents understand where they’re coming from, Raser says. This book isn’t a panacea for all parent-child problems, but it’s a sure-footed work that provides plenty of ready examples for beleaguered parents. It doesn’t address teenage behavior in the context of the physiology of growing brains, but that may be well beyond the scope of this slim volume. And although the book uses the generic term “children,” most of the situations described here are really teen issues.

A solid place to start for parents who hope to solve the enigma that is the sullen teen.