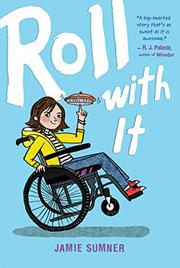 A middle schooler with cerebral palsy faces a new school and family upheaval in Sumner’s debut.

Twelve-year-old Ellie Cowan dreams of becoming a great baker; when she’s not penning letters to celebrity chefs, she’s practicing recipes. But sometimes—especially when her single mom’s protectiveness goes overboard—her CP feels like “the Go to Jail card in Monopoly: No matter where you are, it always shoots you back to zero.” When Ellie and her mom temporarily move from Nashville, Tennessee, to Eufaula, Oklahoma, to help care for Grandpa, who suffers from Alzheimer’s disease, Ellie struggles with being not only “the new kid in the wheelchair” at school, but one of the ostracized “trailer park kids.” But after Ellie befriends outspoken aspiring singer Coralee and fact-reciting “mega geek” Bert (who is, Ellie observes, “probably on the spectrum” but undiagnosed in this small town with little support), the quirky trio find themselves cooking up ways for Ellie to stay—“maybe forever.” Her voice equal parts vulnerable, reflective, and deliciously wry, Ellie is refreshingly complex. Kids navigating disabilities may find her frank frustration with inaccessibility, illness, and patronization particularly cathartic, but readers with and without disabilities will recognize her desire to belong. The mother of a son with CP, the author portrays Ellie and her mom’s loving but fraught relationship with achingly vivid accuracy, bringing the tension between Ellie’s craving for independence and her mother’s fears to a satisfying resolution. Characters, including Ellie, appear white.

An honest, emotionally rich take on disability, family, and growing up.