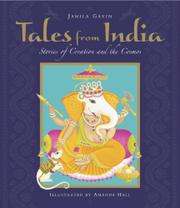 Stories of Creation and the Cosmos

Each tale offers a full slate of gods, heroes, monsters and (often) princesses, as well as plenty of action and, less often, a clever trick or dilemma. They incorporate such memorable images as the sea of milk in which Brahma floats before the Earth’s creation, the decapitated demon head that still chases the sun and moon (“But they would always slip out of Rahu’s neck, and light would return”) and the swayamvara ceremony of Princess Damayanti—in which all her suitors, human and immortal, must line up so that she can choose one. Though 10 tales is hardly enough to brush the surface of one of the world’s oldest religious traditions, Gavin does include a creation story, a flood story and also severely condensed versions of the central events of both the Ramayana and the Mahabarata epics. Pale borders decorating broad page margins harmonize with finely detailed scenes from Hall done in Indian-miniature style to give the volume an elegant look. The lack of source notes or explanations of such significant concepts as “incarnation” and Lord Brahma’s “three in one and one in three” identity make this an inadequate alternative to Madhur Jaffrey’s still unexcelled Seasons of Splendour (1985), though.