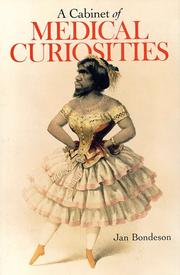 A CABINET OF MEDICAL CURIOSITIES

Eight history-laden essays on bizarre beliefs, fears, and behaviors, plus two additional pieces on several unfortunate human anomalies—all serving as reminders of human gullibility, mendacity, and cruelty. Bondeson, a London-based physician who specializes in rheumatology and internal medicine and has a Ph.D. in experimental medicine, appears to have a genuine love for the weird: Many of the illustrations in this odd little work bear the note ``from the author's collection.'' Those fascinated by tabloid journalism's sensational reports of spontaneous human combustion or the birth of nonhuman creatures to human mothers will, however, probably be disappointed by Bondeson's rather scholarly approach. He traces the rise and decline of beliefs in these and other strange phenomena, reveals the motives of the parties involved, and offers a medical explanation where appropriate. Among his topics are the fear of premature burial and the extraordinary mechanical precautions taken by some to avoid that fate, the notion that a race of giants once walked the earth, and the belief in a race of people with tails. Bondeson then dwells on the cases of four unusual individuals whose fate was to be exhibited like sideshow freaks. Today the Hunterian, a London museum at the Royal College of Surgeons, houses the double skull of the Two-Headed Boy of Bengal and the skeletons of the huge Charles Byrne, known as the Irish Giant, and the tiny Caroline Crachami, a dwarf known as the Sicilian Fairy. The mummy of the fourth individual, Julia Pastrana, known as the Ape-Woman for her hairy body and misshapen face, is in a medical museum in Oslo, Norway. With its numerous illustrations of these poor creatures, this in-depth Believe It or Not can be seen as a continuation of the exploitation that marked their lives.