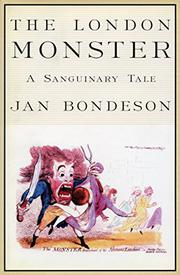 A well-told narrative of the popular hysteria surrounding a mysterious, misogynist slasher who stalked London a century before the Ripper.

London physician Bondeson (The Two-Headed Boy, p. 851, etc.) provides a muscular recreation of the socially chaotic metropolis of 1790: street crime and vice were endemic among a dense populace, with professional policing in its infancy. A series of attacks on female pedestrians, in which a “vulgar-looking man” slashed at them with a knife while uttering profanities with a “tremulous eagerness,” was rapidly conflated into a “Monster mania,” aided both by the £100 reward offered by outraged Lloyd’s insurance broker John Angerstein and by the circulation of inexpensive bawdy prints (which first capitalized on the Monster’s tendency to slash his victims’ buttocks, then were used to cast aspersions on miscellaneous London ne’er-do-wells as Monster candidates). Finally, a fishmonger who was courting an early victim apprehended under suspicious circumstances one Rhynwick Williams, a shabby, impoverished artificial-flower maker with rude habits regarding women—who nonetheless had a strong alibi. After nearly suffering mob justice on several occasions (as had various of the falsely accused), Williams was convicted following two raucous trials, and he ultimately served several years in prison. Bondeson composes a narrative surprisingly attuned to the complexities of this example of popular mania. He maintains a droll voice, in keeping with the bawdy nature of many conflicting original sources. Duly noting the chauvinistic tenor of the time, he ably captures the constrained social circumstances of the young women who were Williams’s accusers, as well as such flamboyant personalities as Angerstein and, memorably, Williams’s opportunistic champion Theophilus Swift. The latter is a dissipated descendant of Jonathan Swift well known in London for his dueling and for his slanderous pamphleteering and whose mockery of victims and general incompetence in Williams’s second trial surely poisoned his chances. Bondeson also offers intelligent discussion of “epidemic hysteria and moral panic,” examining similar recurrences in England, France, and wherever else circus-like atmospheres obscured the realities of serial violence.

An attentive, subtle rendering of a strange historical episode, alternatively disturbing and absurd.