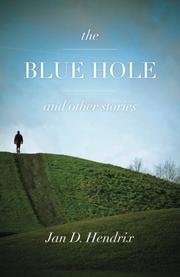 The Blue Hole and Other Stories

Short stories that explore turning points in people’s lives, often from a working-class point of view.

The title of one of Hendrix’s (Tour of Duty, 2012) 14 short pieces, “Seminal Moments,” could stand for most of the others. Each captures a pivotal experience, whether of a boy gaining new understanding of himself (“The Blue Hole”), an old man making a grim decision (“Life Along the Mississippi”) or a couple understanding their relationship is truly over (“The Pier at Nature’s Point”). The stories’ points of view are mostly masculine, with “Patty” a notable exception (“The Attic” includes both male and female viewpoints). Many take place in a timeless American past, often in the South, where everyone has short, plain names such as Mike, Tom, Linda or Bill. The stories’ adults are mostly working-class—a bricklayer, a small-business owner, a soldier—and several are like John in “Following the Trade”: “Hard work was something he knew from childhood. It was a way of life, and he knew no other.” In one of the most successful stories, “Hullaballoo,” Buck, a civil engineer, doesn’t even think of himself in white-collar terms; what’s important to him is working “shoulder to shoulder with other men, their work talk, the sounds of heavy equipment running.” These bring him “a sense of ease and a clear head. As long as there was hullaballoo, he was fine.” Hendrix shows a talent for dialogue when he captures the rhythms of the loud, busy bar where Buck hangs out. He also skillfully brings out Buck’s need for noise and movement, and when Buck tells the bartender that he can help with some work by saying, “I’m available,” the words capture Buck’s world of lonely extroversion. That said, a few stories are less subtle and thus less successful, such as the title story, which reads like a boy’s heroic fantasy of saving someone’s life.

A thoughtful collection in which the strongest stories are the most understated.