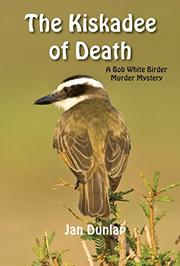 THE KISKADEE OF DEATH

Even when he leaves his native Minnesota, a die-hard birdwatcher keeps finding bodies along with the birds he seeks.

High school counselor Bob White and his wife, Luce, have taken the opportunity of weather cold enough to close schools to flee south for a short break. They head for the Lower Rio Grande Valley of Texas, an area filled with parks perfect for birders, all located near the confluence of two major flyways. Their stop at Estero Llano Grande State Park rewards them with plenty of new bird sightings for their lifetime list. In addition, Bob’s keen eye also picks out a foot sticking out from under a canoe. The dead man is Birdy Johnson, whose involvement with a spacecraft smack in the middle of the flyway has made him plenty of enemies in the birding community. Among those visiting the park that morning were Buzz Davis, a close friend of Birdy’s from the days when they worked in NASA’s astronaut program; park volunteer Rosalie, another good friend; and members of a local birding club for senior citizen known as the MOB. The only clue found on the scene is a flask of Aquavit belonging to a friend of Bob’s who’s in the area working on improving drone border surveillance. Although a furious birder may have killed Birdy, the borderland location makes Bob wonder whether drug smugglers or illegals might be involved. Although he and Luce continue their birding, Bob can’t help but get involved in yet another murder case.

The avian details in Bob’s adventures (Swift Justice, 2014, etc.) make them a treat for birdwatchers or, in this case, anyone interested in South Texas. This one provides enough credible suspects for a mystery that keeps you guessing.