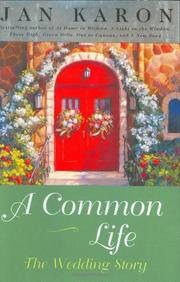 Father Timothy Kavanagh is about to marry his winsome neighbor Cynthia Coppersmith, and all of Mitford (A New Song, 1999, etc.) is abuzz. Such goings-on! So many exclamation points!

Emma Newland, Father Timothy’s long-suffering secretary at the Chapel of our Lord and Savior, still isn’t quite sure she approves of his late-in-life romance, but she’ll do anything for the man. As will Puny Guthrie, his housekeeper, an energetic country woman who’s equally devoted to him. So much to do! Hessie Mayhew, the busiest of the bees, swipes flowers to decorate the church and altar—with the tacit permission of the understanding townsfolk. Why, they weren’t going to use those masses of hydrangeas anyway! Should Miss Sadie’s bosom friend Louella wear lavender or blue? Should Esther Bolick add buttercream roses to the top of her famous orange marmalade tiered cake? Will Dooley Barlowe, the father’s troubled ward, sing clear and true, or will his adolescent voice crack? Author Karon stirs up a tempest in a very tiny teapot for this joyous occasion as the lion and the lamb, the Presbyterian and Episcopalian, join hands, paws, whatever, to ensure that the great day goes off without a hitch. But when the pews fill and all await the blushing bride—she doesn’t show. What can the matter be? Father Tim dashes home to find Cynthia accidentally locked in the bedroom. In a jiffy, he pops the fallen doorknob back in, frees her, and off they go, scurrying madly to get to the church on time, strewing hair curlers like rose petals along their path. And the ceremony begins . . . .

A slight story indeed, filled with pious twittering about the joys and responsibilities of Christian marriage. And that’s not all. Pages and pages are devoted to effusive prayers, hymns, even a word-for-word replay of the wedding ceremony. Not exactly a mainstream book, but fans of the Mitford series won’t mind.