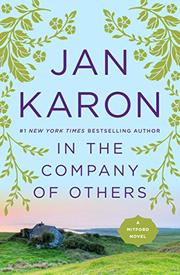 IN THE COMPANY OF OTHERS

Father Tim Kavanagh, 70, and his wife, children’s author Cynthia, 64, have arrived at Broughadoon fishing lodge for a second honeymoon. A repeat visitor to the lodge, Tim re-encounters the proprietors, Anna Conor, her husband Liam and Anna’s daughter Bella, now a truculent teenager. Anna’s aging father William is the resident eminence grise. Until William bought it, Broughadoon was once part of the estate of Evelyn Conor, chatelaine of the adjacent manor house, Catharmore. The once lovely Evelyn, Liam’s formidable mother, is now an elderly alcoholic still furious with William for welshing on his youthful promise of marriage. (Instead, she married wealthy Riley Conor.) As if to prove there’s no vacation from Tim’s vocation, spiritually unsettling stuff happens. An intruder leaps out of a wardrobe, startling Cynthia, who stumbles, respraining her recently healed ankle. A priceless painting disappears from Broughadoon’s parlor. His Catholic hosts seek Tim out as an informal confessor. Anna is worried that William may actually be Liam’s father. Liam frets about the same possibility. William still regrets abandoning Evelyn. Meanwhile over at Catharmore, Evelyn has decided to detox and give her geriatric liver a fighting chance, only to suffer injuries in a fall. Tim accompanies Evelyn to the hospital (the Catholic priest being off on his own holiday) because her older son Paddy has retreated into his own boozy haze. Father Tim sees in Bella the same type of implacability that led him to take on his troubled adopted son Dooley. Can he foster similar paternal determination in Liam? Tim and Cynthia peruse a journal, circa 1861, written by Catharmore’s first owner. The long journal entries do little to advance the present story but are sometimes a welcome diversion from it.

Readers who are not devoted followers of Karon may be impatient with the glacial pace of this installment.